I thought I’d put a link to current listings…I will offer a minimum 25% discount if purchased through here or the HobbyInsider.net forums. If you would like to purchase something here, just add a comment to the post, and I’ll be notified!

Back in the winter, I decided to work on a card project that (a) I was interested in, and (b) wouldn’t be done in a week. Seeing as how the family has gotten back into watching and following the Toronto Blue Jays over the last couple of years, I came up with something fun, and not overly onerous on the wallet and time. I would compile a binder of Topps (regular – i.e. Series 1, Series 2, Update, Traded) Blue Jays team sets for every year the team has had baseball cards.

Now, I know I could just go and buy all the team sets out there off of eBay in one shot, but that kind of makes my “point (b)” above kind of moot doesn’t it? I have been taking my time and starting at the beginning, just getting one year at a time. I didn’t start following the Blue Jays, myself until probably ’87 or ’88, so seeing these teams from the ’70s is kind of fun, reading the backs of the cards and learning about those very first Jays teams!

So right now, I’m putting them all in pages, by year, and hope to have some sort of title sheet in a protector page as well for each year, with a nice high-resolution logo from the team that year (if anyone knows where I could find the logos from each year in high rez, that would be appreciated), and compiling them into a large binder.

Right now, I’m up to 1983 and just need to find some time to get them in the pages and then start designing my yearly “cover” pages for each team year.

Has anyone else worked on a team lineage project like this before? How did you enjoy it? What was it that kept you interested in it? For me, I think, it’s learning about players I had no clue about, and seeing some earlier cards of guys I did follow in the later ’80s.

…I still love it! I haven’t been able to find the time to snag a Brett Lawrie ’11 Bowman Chrome auto yet (or possibly the coin, either) but I did get this for a very good price off of eBay last week. It just showed up yesterday, so figured, what better way to start posting again than showing off my latest Lawrie auto 🙂 There are a couple of endearing qualities to this card for me…first off, HARD-SIGNED! Secondly, he hasn’t shortened his autograph (yet) to what a lot of athletes have these days.

Brett, if you by chance ever read this, remember, keep the quality of your autograph…it’s a great quality and shows you still care for the fans!

I didn’t bust any Gypsy Queen this year, but I have to say the design is a bit cleaner than last year. If any of my readers busted any, how were the hits this year?

I’m off on another business trip tomorrow (the main reason I haven’t been able to post anything in the past month), so while I’m down in New Orleans, keep collecting and enjoy the hobby!

Well, Score has been out now for, what, about six months? I had no trouble (as was to be expected) setting aside a base and a glossy parallel from my own case breaks back at launch, and even procured a gold parallel relatively quick via eBay. I was starting to wonder, though, if I was ever going to see the Black Ice parallel. These were only seeded one per case (as per Panini’s notes, anyway), and I only managed one in my two cases, so I think they’re a tad rarer than you may expect.

Fast forward all the way to March 7th and I managed to find one at auction…which I won quite handily for under $10 delivered ($8.00 total in fact)!

Now I just have to get my act together and get my 2011/12 section of my Tomas Kaberle collection updated!

Busy couple of weeks at work!

Sorry for the sparse hobby-related posts the past couple of weeks…it’s that time of year at work where annual employee reviews are being worked on. I have eight staff to work on, and our company makes it quite a process for sure. I actually don’t mind the whole activity…I like being able to sit down one-on-one with each person and go through what they feel they did well (and poorly) and then compare to where I feel their strengths and weaknesses are.

While the preparation and working on reviews takes the better part of a month, and nothing else stops in the day-to-day business, it’s a necessary part of everyone’s work “existence” and hopefully everyone gets something out of this, like I do!

Hopefully this week I will have a few Kaberle additions to show off…maybe even a couple of rare, harder-to-get cards… 🙂

Tons of Rookie Cards For Sale

Just got a ton of rookie cards in ranging anywhere from 88/89 through to 11/12…take a look through and see if there’s anything you want and let me know!!

The link takes you to HobbyInsider – the best hobby forum out there!

Is Jaroslav Halak a collector of his own cards?

I always get a kick out of selling a card or two to family members of NHL players…usually it’s a sibling or parent picking up cards, and understandably so. I typically shoot a personal message asking if the person is related, and usually get a response back explaining yes or no 🙂

I have sold cards to the Stuart brothers’ dad, Brandon Dubinsky’s dad, Cheechoo’s family and countless others, and I just find it kind of cool.

Today, however, I had something happen for the first time…this card below of Jaroslav Halak sold…now that would not be anything interesting…however, when I went to print the label, it is being SHIPPED to Jaroslav! 🙂

A Lull is a Good Thing

Well, 2011/12 In The Game Heroes & Prospects has been out now for almost a couple of weeks…as usual, sets sold very well (have sold all 14 of the sets from my case) and the autographs and memorabilia continue to generate interest and sales. If there’s a product that is a pretty safe investment for a case-buster every year, it’s got to be Heroes & Prospects. I posted before about how I felt the design this year was re-energized, and it seems to have translated into strong sales.

Now, I have time before the next case(s) that I’m busting get delivered…all the way to May, in fact…a baseball release…2012 Topps Archives! I love the retro idea here designing the 200-card base set using past Topps designs from ’54, ’71, ’80 and ’84. Every box will also have two Fan Favorites autographs, with some rare finds being redemptions for items from Topps’ vault itself! I am looking forward to the two cases I pre-ordered arriving around mid-May!

So, what will I be doing between now and May? Oh, don’t worry…I have a new blog to keep me busy when ideas inspire me, as well as I’ll be continuing to look for deals on lots and collections to buy and sell. Maybe now I’ll have time to finish scanning and listing all of the cards I got in a few weeks back…maybe 🙂

Posted by Kevin on March 5, 2012 in Baseball, General, Hockey, In The Game, Topps

OK…work has been insanely busy thus the sparse posting, but today’s mail just made me make time to post these up…and I’m going to go straight to the eye candy 🙂 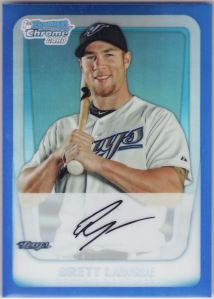 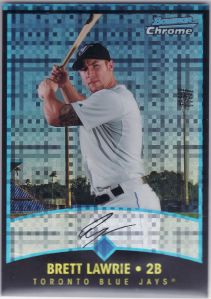 A Beauty of a Find! At Wal-Mart!

27 Feb
I love a great pull like anyone else…even better to me when it comes from something you figure won’t net you anything…like the Wal-Mart 2011 Topps Value Box. You get 5 packs of 2012 Topps Update Series, a special Bryce Harper Refractor (one of three different ones), but best of all a hobby pack of 2011 Bowman Chrome! All for $19.92 🙂
In my desperate hunt for Brett Lawrie Bowman Chrome cards without having to take out a second mortgage or sell one of the kids, I picked up a few of these (the last three in the Guelph store near where I work) on Friday…
On the last pack of Bowman Chrome, what pops out? Some orange refractor goodness with INK!!
It’s not a Brett Lawrie, but still – nice getting a $100 card out of a retail box! Enjoy the colourful scans 🙂